Graeme discusses plot points and themes from his novel, Crystal From The Hills, and introduces plans for a follow-up work. 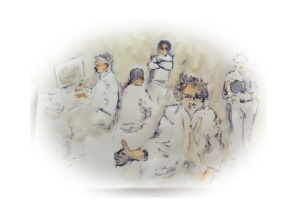 The whole ethos of treatment shifted: customer service means saying things along the lines of “I’m sorry for your inconvenience, let’s see if we can fix that for you.” The therapeutic intervention is more like, “I see that you’re angry, let’s see if we can figure out what that reaction is about and also see if we can solve this problem.” The differences are crucial and multi-layered, and I don’t think non-clinicians (in many cases, policy makers) understand the differences. Therefore, managers were habitually striking impromptu bargains with family members, overruling clinical staff that had diligently counseled families about the importance of their participation. Invoking the flexibility mantra, a Saturday floor manager would grant full visiting to a parent that had missed required activities, and who had cited work or other supposedly unforeseeable conflicts. The activities stopped being required, in effect. Meanwhile, the only conflicts in these scenarios were the ones being habitually avoided. These parents that maneuvered their way around program structure: they had impassively heard the rules and structure outlined upon admission; they knew from experience how to maneuver within systems. They’d been doing it for years with schools, social services, employers and drug courts. They promised compliance up front but reserved their resistance for later times, when loop holes in the system had been cunningly assessed.

Claiming that which had been promised by case managers, who were often not around during visiting times, the splitting ruses started working and as a result, patterns of manipulation were reinforced. Flexibility indeed. The team approach was fostering increased instances of splitting, team fragmentation. The solution to this problem was to ignore it, and before long the term splitting seemed to become archaic; shuffled off to a TC concepts museum alongside benches, dusty hospital scrub shirts, image breakers and old man Bobby’s suspenders. If nearby the case managers might have intervened with the visiting day arguments, but increasingly they weren’t available for these kinds of situations either. The availability of case managers, to collateral contacts, to the electronic pull of computer screens, and not the kids in the program was of supreme importance, meaning therapists were sometimes even missing group therapy sessions in order to complete documents, or to meet with collateral contacts who sometimes visited the facility without bothering to make appointments. I’d never been asked to compromise my direct duties to clients—certainly not spontaneously—when I was a case manager. Some kids, meanwhile, complained that they were hardly getting to speak to their therapists. Were they customers? Clients? Consumers? Patients? Kids? I wasn’t sure what to call them any more.

Emotional amnesia. That was the term that flashed in my mind as I read Donnel Stern’s “Witnessing Across Time: Accessing the Present from the Past and the Past from the Present”. Starting with a familiar idea, Stern writes that for survivors “the past of trauma cannot be understood in the present”; that it is drained of vitality, and that memories lack “plasticity”. As practitioners, we experience this in the affectless way in which trauma patients recall life events. Of course, this article refers to several sources and therefore Stern is not the author of each idea. I won’t attempt to credit them all, but rather represent them as best I can.

A second kind of effect: that of contemporary trauma upon capacity to experience the past is the focus of much of this paper. The three clinical examples, one drawn from a fiction, feature situations in which a character or a real-life individual has experienced a contemporary trauma, and that trauma robs the past of any goodness. This is seen in the example of Michael, the character from The Wire. A positive memory of his saving a child from a gang, uttered by Dukie, the boy Michael had saved, is denied. The positive is forgotten. That life is gone, and goodness is dead. With Menachem, the child who is smuggled out of Krakow, we learn of another kind of trauma: the reunion with a mother who has been beaten down by war: sick, emaciated, barely surviving. Menachem’s experience of his mother violates the memory of her vitality, as preserved in the picture he’d kept of her and even prayed to—a witness of Menachem’s creation. Upon reunion: “Something accessible becomes inaccessible”. Meaning, the former memory is tainted. Thirdly, we read of Darryl, the amputee Vietnam veteran who enters therapy, but continues to act out violently after previously suffering a psychotic break while in combat (he fires his weapon at home, terrifying his family). Darryl seems good natured and quiet in sessions. He came from a family of origin that was warm and related, but trauma has soiled nurturing, and only in therapy can a good relationship be preserved.

So trauma distorts an experience of the present, spoils an anticipation of the future, and even robs the past of its once seeming integrity. Witnessing, the article suggests, holds the key to “retranscription”. I am reminded that secret-keeping, if sanctioned, is so because many assume that secrets (not speaking of the past) will protect individuals from pain. Stern’s article more or less echoes this, but adds that the absence of witnesses sends the message that no one cares. “Nobody ever gets over anything,” Stern quotes from a contemporary novel referenced as House of Meaning. The line is despairing, suggesting an absence of hope (or meaning?) for those living in the wake of trauma. Incidentally, the reference in his article contains a mistake. I happen to own the Martin Amis novel in question, which is about a love triangle in a Russian Gulag. The actual title is House of Meetings.